Enough people for ya? 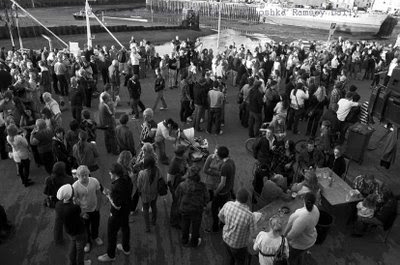 I love the smell of people in the evening

So I was surprise, surprise out on Friday night. Nothing earth shattering on the news front there so far. Shocking thing was though so it seems was most of the town turned up too. Now I'd like to tell you they all came out in force just for me to take this group image but that would be a downright manipulation of the truth. No,they were here for just a little festival we have here for Ramsey National Week, called Ramsey Rocks. Yeah honest, it's official our town rocks it's little socks off once a year( shame it's not once a week as far as I'm concerned) and the residents come out to play. What though happens here, and what where this (not so select) group of humans (I use the term loosely, I know some of them, hello Jan) observing. Well that would be telling and giving the game away in one fell swoop, so no you'll just have to come back for more to find out. Let's just say there was quite a lot, more than we have in a whole year. Here's a question for the locals though. Where did I take this image from?


Now this is the naughty bit. I confess to having the mad idea after spotting an open window of going into a certain building and taking images looking onto the the harbour and this terrific view of the people below. Talk about a perfect vantage point! So, I climbed the stairs of (?) and found the room of the open window and in full view of a few shocked girlies proceeded to rattle off 3 shots. More may have got me thrown out. While they were still in shock I hightailed it back downstairs to my drink as if the whole event they had witnessed hadn't happened. The room with a view? The ladies toilets of a certain drinking hole.What can I say. I am a photographer, I came, I saw, I conquered the best location point after a little dutch courage. I do these things so you don't have to remember. You asked for people on the blog, I got you them.


Make the most of the people. They have all gone home now. Shame.
Posted by Jane Hards Photography at Sunday, July 12, 2009

Ramsey has people? They are not shipped in? Good thing it was the ladies restroom with the window open. I would hate to have to hear the story about how Gary had to bail you out because you were in the mens rr and got arrested.

Did you get any of the bands?

RM- Yes I did. Where you there?

Jim- I think that would be a great photo op from a jail cell though don't you?

Uh, Babooshka, «Louis» thinks he wouldn't have been able to get away with what you did....

I'm gonna have to dig around in my archives for a similar shot taken in similar circumstances in June of 2002. You just gotta be bold and look like you know where you're going right B?

Your jail cell photo sounds appealing enough, but I don't think you'd be able to smuggle the old Nikon in there. Just a hunch.

Looks like a cool party from where you're standing!

That's very intrepid of you! Looking forward to more from the festival.

I do dislike dolls but it is people who bring me out in sweats.
Just can't take crowds... unless they are motorcyclists.

It's a nice crowd too - mix of ages, and quite sedate (in this shot anyway). There are one or two people looking up at you in surprise :)

Gorgeous perspective!
And as a photographer we don't want to loose our beloved cameras in the crowd! ;)

I can't believe me standing with a camera in a huge crowd on Hultsfredsfestivalen.
But it's been years since that happened.

I'm looking forward to see more of your shots!

Is it ok if I put you on my blogroll?
Of course I won't do that without your yes first!

Have a great sunday!
Anna

If I'm not mistaken the view must be from the ladies toilet of the Traff, not that I've been in them mind 'cause I haven't.......And as a bonus you've caught me on film......

Mannanan - Of course it is the Traf. I do remember pointing the open window out to you, but I was hoping you might have forgotten. I can see you on the bigger picture I have of this shot and several people I know.

Vita - Fine to put me on your blogroll.

I LOVE that you snuck into the ladies' toilet for this - now that's dedication to your craft. (Or is it a wee bit too much of that liquid courage?)

Is the festival primarily for the locals or do the tourists start coming in by the boatload?

You clever girl, you! Gather ye rosebuds, et cetera - the details are fascinating - some people trying to look involved, some wishing to be elsewhere and the bikes! - ready for a quick getaway, maybe?

That's a great crowd shot. I'm not good at shooting people and I admire those who can. Fun story about how you got the shot.

Babooshka, you are dangerous with a camera...lol
Fancy even thinking about looking out of a loo window...:-))))
The mind boggles, what's next? lol

I wonder if I know anyone there?

Great shot - worth climbing those stairs!

I can almost hear the chatter and glasses clinking. Great photo but an extreme way to get the shot!

Lots of life going on there - and just the perfect angle :)

Hehe, shooting from the bathroom window. Now that's a good one. Gotta be brave to do that, man or women. My camera stays very clear of bathrooms when there's people around for concerns of being accused of some unsavory intent.

Babooshka - what's the story on the boat out of the water in the background?

What lengths you'll go to get that perfect shot! Love your tale. ;-)

You have beautiful brown eyes. Watching you.

I love how you wrote this blog....what a hoot....Jim is pretty funny...importing people in deed.....it does look like fun though.

Now if you had crashed the men's loo for the picture that may have been a little more exciting.

You are so funny. I hate living in Ramsey. Boring. You make me laugh about how rubbish it is. My dad is in the photo.

Looks like they are having a great time. Could also be a scene from Alfred Hitchcock's, Twilight Zone, and something bizarre is just about to happen. Can't wait for you to continue writing the story!

I love the title, I love the perspective.. so were they queuing up for the loo?

Clever vantage point! There's a lot to discover in this picture. Well done.

The smell of people, yes, I can almost smell the scene. Nice.

I'm amused at the way everyone is standing around in little groups..

Reminds me of the woolshed dances I used to attend, as a teenager, back home in New Zealand :-)