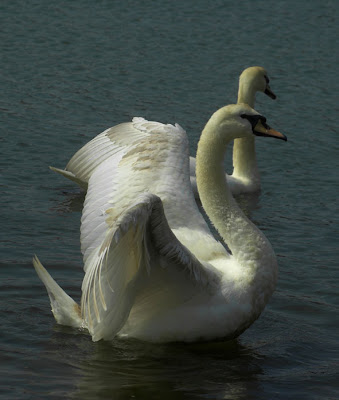 A swan song is supposedly the the song sung by the mute swan as it's dying. Mute swans though aren't at all mute. They hiss, snort, grunt, and produce very shrill noises, especially when guarding their territory, fear of attack, or even when feeding. A swan song is also attributed to a last and most magnificent performance of an artist before they bow out of their chosen profession.

Wiki says
Swan song has become an idiom referring to a final theatrical or dramatic appearance, or any final work or accomplishment. For example, Franz Schubert's collection of songs, published in his year of death, 1828, is known as the Schwanengesang (German for "swan song"). It generally carries the connotation that the performer is aware that this is the last performance of his or her lifetime, and is expending everything in one magnificent final effort. Anton Chekhov's one-act play, The Swan Song (1887), describes an aging actor who, while sitting alone in a darkened theatre, ruminates on his past. Agatha Christie's famous mystery novel And Then There Were None includes, as a plot device, a gramophone record entitled "Swan Song." When played, it accuses the houseguests and servants of murders that, for various reasons, they were not punished for. The killer intends to punish the wicked as a final act.

Robert R. McCammon's book entitled Swan Song tells the haunting story of a young girl in a post apocalyptic world who will be the savior of the human race.

My hissing, flapping swan was taken in where else but Ramsey Harbour. Obviously this one is fighting fit, but the swan song could be sung for the Isle of Man as an offshore banking option. With the credit crunch and recession time for a re think. The Isle Of Man has been on the news a lot recently due to the Collapse of the Icelandic Bank Kaupthing Singer & Friedlander where some islanders have banking connections. Tough times ahead.

A change for me, quite a hefty topic. Normal service will be resumed next post.

For more wonderful camera critters see MISTY DAWN Camera critters and be sure to leave a nice comment for Misty' s own outstanding posts.

Uk readers. Don't forget to put your clock back.

I love swans. Great shots.
Thanks for stopping by on my very first Sky Watch Friday.

Kudos and props. So the island is a tax haven. You gotta get out out of there and come to Boston.

These are beautiful swans. Great shot!

Great photo - thanks for sharing.

But do you know how to get my money back? £27,540.32. I hope you are are ok posting your comments. You still have the birch don't you? Can I email
you privately.

Those are such beautiful birds!

First the photo. Fautless. Robert we don't have the birch anymore. The banks have only got themselves to blame for being greedy, and so have the investors. Keep up the good work, but more drunk posts.

I never knew that about the swan song before. Thank you for that interesting bit of information. I shall pass that along.

Also love the photo. Swans are some of the most graceful animals known to man, and I never tire of looking at them.

Beautiful shot for someone who is "under the influence"!!!!

I love their poses! They are beautiful creatures!!

Gorgeous, even if they do hiss, snort, and grunt! BJ

This is a beautiful shot!

You can take my photo anytime hun.

Babooshaka: What a neat post and the White Swans are quite lovely.

Thanks for the run down on all the references to Swan Song. I always thought it a reference to the death scene in Swan Lake.
I remember being hissed at by two swans in Golden Gate Park when we lived in San Francisco. I must have gotten too close and they let me know. I'd never had that happen except with geese before.
You've captured their grace and power in this shot!
-Kim
Seattle Daily Photo

B.
I am hummng "Only You" by the fabulous Platters because only you could take this photo and give such a narrative! You're the best. Take a bow.
V
PS I am toasting with FB of course.

Great shot.
Trumpter Swan and Tundra Swan winter down here in our Valley. They come from the arctic and stay from October to about March. Very pretty. MB

Interesting and Gorgeous!!! Look at the beaks and the wings are incredible!

Great composition.
No, no meltdowns please - though might get a bit Man-ic

I love swan, but I'm afraid when I see one of them... Beacause, it clamps hard with its beak !

Thank You for the text and explain...

No wonder that this theme of swans is often used in art, ballet and music. The Dying Swan is a favourite subject of course. I love swans and your photo shows that you are not singing your swansong yet. Hopefully not for a very long time. Have a great Sunday.

That is a truly beautiful photo B!

As far as the subject matter goes, harder times come for us all I'm afraid.

Really bizzare but I was listening to "Ride A White Swan" by T-Rex when I came across this post. Lovely image, I believe swans mate for life, don't they?
As for the credit crunch, I guess it's just the chickens coming home to roost. Or should that be swans?

We are not worthy of you photos.

that is an excellent capture!!

me ann my camera said...

I've heard that swans are very protective of mates and offspring and I have been known to snort and hiss at one who might have given my offspring a hard time. (she won't let me hit them with my cane). Now I know what Swan Song means..

I have never seen a swan all my life, but now, even if I can't see one for a while, this is more than enough! They are so beautiful. And very much graceful!

The trip was so great! I will be having a series for that trip starting today! Hope you'll like it!

Fab picture. Swans are beautiful animals, and you caught them just right. Lovely.

Fab picture. Swans are beautiful animals, and you caught them just right. Lovely.

What a graceful posture!

Power and grace. Kim got it right. I believe swans mate for life, don't they? Fascinating commentary and a beautiful photograph.

I saw some swans this week without my camera!!! love yours though.....

They look beautiful but they attack you! Second only to geese. I know there is the clock thing, why can't I ever get the numbers the right way round. S**t I am good at math,can do numbers instantly, especially the calculation of the tab when we're out. The clock though that always gets me. Maybe that's my swan song. Hell Cheers!!

enlightening post, thanks for the info, nice shot too..

Love the serenity of swans swimming! But this shot takes that stereotypical thought to a whole new level. There is a sense of flowering serenity as the wings open! Very beautiful!

Swans are black in Australia so white ones seem exotic to us even without your beautiful photography.

A beautiful capture of a very elegant bird

The are such beautiful birds and I always think they look so delicate.

And this was a charming and very well written post. I didn't know any of this- thank's for teaching ME something today!

You could monetize your blogs and earn money by writing reviews for others.

Check out http://www.blogcytes.com for more info