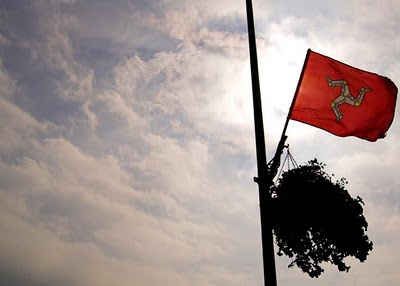 This week Abc is bought to you by the letter T

The Triskelion isn't exclusive to the Isle Of Man. You will find the the three legged symbol that appears on the flag around the world. It is the symbol of Brittany, France, also appears on the national flag of another island, Sicily and areas of Northern Spain. Often seen in Celtic artwork as a more spiral design of the three legs. The list goes on of where the bizarre symbol and it's origins can be found but I'm just concerned about the Island I live on.

As usual this island full of myth and legend has many variations of how and why it came to be the symbol that appears on the flag. Did the Vikings bring the symbol with them after seeing it on their travels before invading here? One thing is clear though it should never be shown the wrong way up, as the people of Mann, bow to no one." Wherever you throw it, it stands." I'll let you Google more on the Triskelion, and let all those people who have the flag the wrong way up change it. Oops! Also, I have actually posted quite a famous island landmark previously that has the Triskelion on facing the wrong way round, as a mirror image. If it was a stamp I'm sure it would be worth a mint! Surprising how many people don't actually notice it when they are milling about. Must have water on the brain or rather lax.


For more T's around the world see here

Fascinating post and as soon as I leave here, I'm going to go Google and learn some more! Hope your week is going well!

Beautiful sky, a really great way of representing the flag. (My wife saw the Isle of Man for the first time ever this week - it was a very clear day in Llandudno and we could see your mountains across the water.)

Very interesting about the Triskelion - I don't ever remember seeing it before visiting your blog.

I know the building. Funny clues. Great way to show the flag too.

I bet you've been anxiously waiting for "T" so that you could make this post.

I was Martha and I usually go with TT, The island motorbike races. Why haven't I had this before.

I didn't know the three legs of Man were also found on Sicily.

What a cool design & I love how you've photographed it.

Yes Gerald on their flag too. 'Tis why I joke about the Manx Mafia.

Your posts are always so interesting. Great shot and information.

Clever lass. Didn't know about the other island link either.

Thanks for posting this. I've always wondered about the symbol.

interesting about its geographic reach.

I've never seen this - fascinating - I'll Google it up and learn a bit more - thanks for the photo and the T start!

I wasn't familiar with this at all. But then I am pretty certain that I don't know everything... yet..thanks for the blog visit...the cats run the house...just ask them. But who could resist two ill kittens who someone dumped in a park. Many dollars later, one still have health issues related to that early treatment, but they are both happy. Unless it comes to the heated cat bed..... @:}...Michelle

Well that was interesting! I didn't know that this was called a triskelon! We had in Indonesia a certain brand of soy sauce, which was called "Kaki Tika"meaning "Three Feet".I haven't seen it any more since we left Indonesia in November 1945.
Thank you for your visit and kind comment.

You write so well, thanks for this interesting post! :)
Léia - Bonjour Luxembourg

Terrific T post. I've seen the symbol but did not know it was called a triskelion.

Well, I just about know when the Union flag is upside down but the triskelion?? I shall ponder long and hard on this - well, at least until the wine relaxes me ;-)

Really interesting stuff! This is the kind of word I'd have fun using in a Scrabble game except I know I won't remember it! Too much water on my brain!

I didn't know the Triskelion was in reverse on the landmark. You win again.

Great post, Babooshka. I did not know about the Triskelion. :-)

There is a nice article about the Isle of Man on Wikipedia (in French). Is there any youth hostel on your island?

What a fabulous shot of the flag! I've stood waiting for the longest time, waiting for a flag to spread beautifully like that ;-)

A very informative post. The problem of the flag flying upside down is shared with the Union Jack, which at times is flown upside down in foreign countries.

Marie I'll get back to you about the youth hostels. There must be something of that kind here.

Interesting post.I had not heard of that symbol before