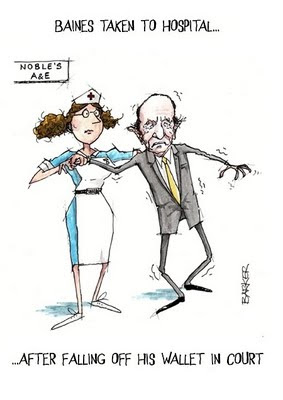 Abc- M
Whose been a naughty Manx boy then?

Trevor Baines Tycoon infamous Tycoon of the Isle Of Man has today been convicted of a multi-million dollar money laundering scam. He was so shocked at the verdict he actually collapsed and was taken to the local hospital. The image above, by my partner Gary, you know the Political cartoonist depicts this scene with a little gag. That's what a topical illustrator does. Clever boy.

Baines was accused of transferring $175 million to bank accounts in the Isle of Man,(just like Tony Soprano did) knowing or at least suspecting that the money was from the proceeds of ill gotten(are there any other type?) of crimes. Tut Tut!

The funds had been accrued dishonestly by Roys Poyiadjis, who just happened to be the bent senior executive of American software firm AremisSoft. He fooled many Wall Street investors by inflating the share price, thus inflating the companies overall wealth. Or what we call a nice little earner in these pasts which found it's way here, via Trevor Baines and the Isle of Man Banking Industry. Oh dear. Obama was right after all. Those rules and regs do need tightening.

So there you go. That's my Abc Money Laundering, and you thought I lived on a sleepy little island. Thanks to Gary for doing the illustration in record time today for this post. Now that is real talent. You can see more of his work here. For other Abc's of a less fraudulent type here.
Posted by Jane Hards Photography at Tuesday, October 13, 2009

What a brilliant post - one of your many best!

Ehat is a million or 175 between friend? Maybe he has one for me too.

What a corrupt place you live in.

That cartoon is just brilliant! And the choice of M is fantastic as well...

Bet there's a fair bit of bent money involved in that horrible development on your park. Amusing drawing. I miss them on the Politics Show.

In this Political climate too we could do with him back at the BBC. You may tell them that anytime, I couldn't possibly comment.

Nice to have you back B.

Great post, true you. And brilliant illustration Gary. What a team you make :)

Very clever post for M. I think you rate the gold medal for the most original.
Poor man got wounded falling off his wallet..... (:0)

Who says organized crime is dead?

Fabulous post - excellent M - brilliant cartoon!
Popped over because I just knew you would have some gem to offer on this news item.
Sleepy little island eh? Who'd 'a thunk....

Not a line wasted here, not in the cartoon, not in the commentary. I hope there is some connection with the development of that park and that the brakes will be put on that now. But of course, I'm living in a fantasy world with fairies on mushrooms.

Money laundering and fraudulent money schemes seem to be on the rise. Wish I were smart enough to figure one! :) Love the illustration and the narrative of the crook...

Well, for heaven's sake. I truly hadn't expected something of the sort. There are quite a few people here who need to be knocked off their wallets.

This is just the tip of the iceberg. A very corrupt island finally showing it's true colours.

How great to log on and read this one. Not only are you Ramsey Daily Photo. Now you can be, Ramsey Daily News too!!

Sorry to hear that your idyllic isle has one of these schemers too. At least he got caught. Do we dare ask, Where's the money?

An excellent M post!Multimillionaire, monkey business!Thanks for showing the really funny cartoon.
Thanks for your kind comment!

What a naughty place the Isle of Man is! I'm sure Baines didn't realise he was doing wrong . . . cough, cough . . . Great cartoon!

I haven't visited in awhile, Babooshka, but I always thought you lived in such an idyllic place. Apparently, criminals thought so, too:) Great post!

A most creative M!
These news stories give us much entertainment. Delightful cartoon.
I like sleepy little islands the best. High drama is best left on tv.
Sherry

I remember that money is the root of all evil and your post certainly shows that. Great cartoon.

How frightening that this sort of thing is going on everywhere. When it's happening on the Isle of Man it's super scary...or even in Canada where we've had more than our share of scams lately.

I certainly don't think where you live is any more or less corrupt than most. Still, I doubt anyone else picked Manx Money laundering!

Throw him in the slammer. Good one G!
v

Thanks Mo and thanks to everyone else for your kind comments. 80)

Just a thought. How about sending this cartoon to the Manx Newspapers? We need a Political cartoonist here well news satirist. Well done both on the quick turnaround. Bang on the funny money!

Jon, I approached Manx newspapers a couple of times offering my services, but they didn't even have the good manners to even reply.

His wallet must have been pretty thin after the verdict to cause him such pain -:)

It just amazes me that such smart people would do something SO dumb and think they wouldn't get caught! INSANE!

Haha! What a naughty boy, indeed! And what an original 'M'! Quite the most inventive that I've seen so far!

Brilliant illustration! Perhaps he's the one been investing in the rip-up of the nature preserve, eh?

Sorry, Babooshka, I don't know Trevor Baines or anything he's gotten his greedy hands into but I just had to tell you my maiden name is "Baines" spelled "Baynes. " And I'm absolutely no relation! :)

Love itOh how the mighty have fallen...