Now that Babooshka's back in town - Skywatch 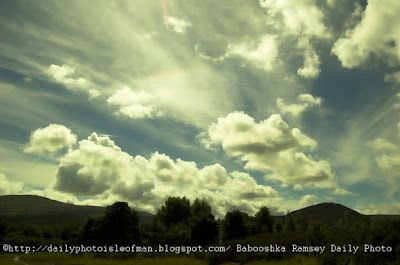 Yep that's right, the teeth are sharpened along with the pen and lens and Ramsey had better look out....Babooshka's back. Her pearly whites are ready to draw those scarlet billows with nevah a trace of red in the aftermath. Isle of Man bigwigs cowering at the thought I may be coming for them (verbally of course) are quaking in their three legged boots. Lets be 'aving ya then. What's been occurring in my absence?

Ah. My absence? That was my little sojourn to the South of France, with purposely a computer free zone. It was of course fabulous. Very hot, laid back, fun, and so relaxing despite the bruised knees. Blame in on the Baltic. Even spending the day photographing St Cyprien Plage for work was not a chore. How could it be. Have you seen that beach! Man alive it's gorgeous. Want to see it? Want to know why the bruised knees? Well not here, you'll just have to wait for my new blog sweeties with a French flavour. Back to Ramsey.

Needless to say we arrived to the tail end of Hurricane Bill. Yes as if it doesn't persist down with water enough here we had to catch the back end of that. Not happy with Bill. Spent a day working sodden through to the bone for a company I should have known better than to work for again. Only for two weeks, but lets just say what a complete bunch of ungrateful, rude, ignorant, incompetent Bankers.

Well the bridge is still swinging, the clouds still rollings, more shops still closing. Same old scene. Stop press exciting news, the Grand Prix, (more motorbikes to you) is here and we have, whoopie doo, a new ice cream parlour. So I do then have something new to show you. In the meantime today is all about the skies and I have somewhere up there on this page my offering of Sky Hill this week or for other skywatchers see here
Thank you all for the lovely emails and comments in my hiatus and forgive my lack of going anywhere near a computer to respond. Time out over and normal service has been resumed. Hand me the soapbox, duck and cover, Babooshka's back in town.
Posted by Jane Hards Photography at Thursday, August 27, 2009

Good to see you back, Babooshka! Sounds as though you had a great time and you probably needed it to face the devils that always await our return! Whatever! it's a gorgeous sky full of lovely clouds! Lovely shot as always!

Have a great weekend, try not to get into any trouble -- well, at least not too much.

Babooshka: That is a beautiful capture of the blue clouded sky.

Welcome back. Awesome portrait of majestic clouds and big sky.

You knocked it out of the park, so to speak. Brilliant!

Hot Damn! An ice cream parlour springs up to greet you!! That'll make you forget all about France. Yeah , right.
V

I also had a rest from blogs and computers earlier this month and it's a nice thing to just realx for a while. You don't seem to have lost your photographic skills though in the meantime. ;) Wonderful Skywatch photo!

Welcome back, Babooshka. I imagine the people of Ramsey are indeed quaking in their three boots. Glad you had some time away, I feel your energy. Oh, and I can hardly wait to hear more about the new ice cream parlour. (Nothing THAT exciting has happened in EG for a long while.)

Beautiful shot. And yes, the South of France is perfect for hollidays.

You looked and sounded like you had the best time off. And what a wonderful clouded view you shared.

Beautiful. I love photos with lots of big, interesting clouds.

Skies will follow you where ever you are. I send a norwegian sky today.
Have a nice weekend
Hartmut

Beautiful sky and lucky you going to France..

I love the butterfly on the plant too. You have some fabulous pictures.

Good to have you back B. Sounds like you had a great trip (I'm not even going to ask about the bruised knees!)

This is such a dramatic sky, great photo to come back with :)

V- you have to go to Perpignan.

Marley- I am back but my head and heart mostly definitely are still in France.

Sounds like a wonderful vacation and look forward to seeing your photos. Great sky here too.

Welcome back! So sorry about the bankers but I can't feel too overly sorry to a person who just got back from Southern France. ;-)

I went to Spain and Portugal this summer but I had to pay for it!

Looking forward to those pics you've dangled under our noses!

Impressive photography. Impressive also in an explosive way - like the sky is blowing up!

These billowing clouds make for a very dramatic sky! Love it!
Welcome back from vacation, now- you go girl!!!
I love the way you write. :)

Quite ethereal.
Sydney - City and Suburbs

That is straight out of a painting girl. Masterful!

I know you had a good time and now want to move. Don't blame you for wanting to get away from it all, including the puter. But welcome home and back. It's a beautiful sky.

Welcome back! Those clouds look like they are streaming from the center of Bill! Looking forward to your pics from France.

Lovely sky photo. Seems like a storm coming. Seems like it is raining everywhere. Have a nice weekend.

Thanks for sharing and welcome back. :)

You certainly came back with a stunner. I'm glad you enjoyed your computer-free time.

And the heavens opened up for Babooshka to photograph!

Such a beautiful sky! Keep thinking the clouds are going to move! really nice shot

Beautiful Sky Watch shot!
Glad you had a pleasant vacation in France. For me, this year just some trips to the mountains!

This Cloud-ia can only say:

I love those clouds, fantastic shot as always.

Have a great weekend
Guy
Regina In Pictures

This was just a stunning sky watch.

quite dramatic clouds you have. looking forward to your South of France photos.:P

Welcome back! Part of me is also eternally in France.

Ramsay turned on such beautiful, majestic skies for your homecoming! And an ice cream parlour too!
Janice.

Hiya and welcome home.....we however are just prparing for our expedition! Catch you in a week! Hopefully ABC is scheduled, keep fingers crossed!

That sky shot is amazing.

Beautiful, just beautiful. A wonderful capture. We should all look "up" more often, don't you think? Thanks for stopping by my blog and leaving a comment!

Another gorgeous sky! Hope your vacation was relaxing and it's not too difficult to get back into the "grind".

Wow what a welcome back. Those clouds and light are a blockbuster.

It is good to see you back, even with cloudy skies.

Welcome back! Your clouds look as though they're rushing away - perhaps in the direction of France?

What a lovely capture, so filled with natures beauty and wonderful cloud formations,

Welcome back! Sounds like you had a wonderfully relaxing time! Beautiful mixture of clouds there, heavenly. Sorry about Bill invading your holiday time... sigh.

Good to see you back. That's a fantastic shot. So much movement captured. Glad you had a fun vacation.

You sound revitalized! Nothing like a nice vacation to get the creative juices flowing. Wonderful picture of the clouds!

Recommend some of Taiwan's high-quality sites so that you do reference and to share ~ and we wish everyone peace and happiness!

Back from your holiday's with a BEAUTY.......Keep up the brill work Babooshka.

Glad you're back and that your teeth were not dulled by sun and sandy beaches.

Clouds, but beautiful clouds! Where did you run into Bill? I am on the coast of Maine, and I lost track of him after Nova Scotia.

Back to reality with a bump. Nice to know you're returned safely, even with bruised legs. Looking forward to more diatribes about things you can't stand. Glad you found my Robin Hood story funny. Some people might have thought it was real!

Don't take this the wrong way but the more things go wrong for you the better your posts. I laugh so much at your writing. Glad you are back even if you are not.

That is just a great SkyWatch!

Looks like those clouds waited especially for your arrival! Welcome back and thanks for the visit...

Ah, the poor bureaucrats at city hall. Well, the have been put on notice -:)

Welcome home. I'm off on a little scooter adventure next week. Some 2500 miles or so. Should be both fun and refreshing. But, I will take a computer along -:)

great to have you back! missed your stinging humor and the stunning photographs and of course your words of wisdom on photography!

Gorgeous photo! Sounds as though you had a wonderful time even if you were not completely appreciated. Welcome home!
Spirithelpers

Great, love the definition you have achieved in your shot.

Dalai Lama's public trip from August 31 to September 2. Dalai Lama plans on the 30th night entry from Taoyuan International Airport, 31 Chinese and foreign journalists will be held the morning, afternoon, and visits prospecting disaster victims, on the 1st of the trip was a public speech and the victims of the village, a modern place in Kaohsiung City Comprehensive Stadium, 2 No. Han God Dome Banquet Hall with Cardinal Paul Shan Kuo-hsi of the talk.

Glad you're back. This image is a welcome sight from our wildfire smoke skies.

LOL, welcome back, I can tell you wanted to come back real bad. Great return shot.

Did you take snaps in the South of France? Well I suppose it wouldn't be appropriate to post them on a site dedicated to Ramsey lol!

Hope the holiday was great for you!
Ciao

Welcome back, Babs. I missed you.

I found this web site to know more about Isle of Man. I hope it will help you.

A grand post marking your return. I can't wait to see some of your holiday adventures and look forward to more Grand Prix.

Thanks for coming back to us. You've been missed but I can tell you're recharged and back at it!!

Superb roll of clouds happening! And welcome back! Great to see you "bristling" again!

Nothing wrong about using same phrases again because recycling is still in fashion these days.

I like your sky watch photos. There are so wonderful.