Church of Our Lady, Star of the Sea - My World 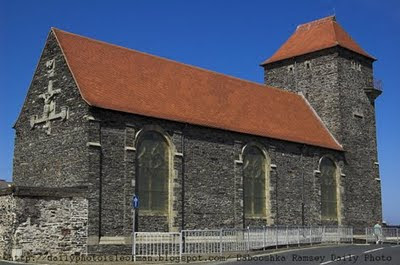 Hands up all those who said it was a Catholic Church

Actually that is not the full name. That would be, Church of Our Lady, Star of the Sea, and St Maughold - Ramsey. As you can see that would have been a rather long title so I went with the slightly abridged version. So who guessed from yesterday's image of the front that this was actually a Catholic Church? I said some of you might be surprised and my reading the comments I see some did however get it. Just where the man turning the corner is would be the part of the church I showed in black and white at such an angle this top flattened. That may have fooled some. It doesn't look as austere in colour though does it?

A snippet of history.In 1863, a disused warehouse was converted into a what was then a small chapel. Fundraising was organised by Father Barton who tried to gee up the parishioners to cough up the pennies. Unfortunately he died before work on the church could begin. His efforts in raising the funds for the church though went ahead. The new church was designed by Giles Gilbert Scott with work starting 1909 and completion in 1910.The princely sum total for £3,000. Wonder what that would relate to now? Structural repairs where made to the facade in the 1980's mainly due to the coastal damage from the salty sea air and occasional wave crash. Did I mention this church literally is on Queens Promenade sea front. How about that for a wedding backdrop? Especially on a blue sky day like this.

So there you go. A little bit of spirituality that is not the bottled kind. Well at least it's a change from the beach. For more from others My world images see here.
Posted by Jane Hards Photography at Monday, August 10, 2009

Email ThisBlogThis!Share to TwitterShare to FacebookShare to Pinterest
Labels: church, Church of our lady, Mauhold, my world

There is a Star of the Sea church in Brooklyn. It is near the docks and was a worship place for merchant seamen. Thanks for sharing this one with me.

You are right. It's a perfect place for a wedding. And the history of the church is amazing.

No I didn't get it. Looks so different in colour.

It's pretty. I always loved to see old stone structures.

I love it! It's one of those wonderful old buildings that just has an interesting personality all it's own. Great shot as always, Babooshka!

Have a great week!
Sylvia

well i am duly surprised - didn't think it was catholic but then you did disguise it by your angle - just goes to show.

I am not surprised it was a catholic church sold....
and why, because my village collect money to buy an old chapel for Catholic mass on Sunday's...
It was lovely to have mass in the village....
What did they do, closed and sold it...:-(
The last Easter Sunday it was open, I took my mother-in-law who is C of E with me , they were standing outside, did it make sense?...
I did not think it was that old either, it was the sharp angles that gave it away....
Nice bit of History Babooshka....
p.s. Is babooshka from Elton's song?

I liked her, a real Kathy come home type...lol

I knew it was OL. More like this, very pretty.

Babooshka: That was a neat look at the history of the church.

That's a beautiful church. Good to see more of it and read about the history.

I tend to think church when I see old buildings with towers. Great shot of the church and blue sky! And interesting history of the church.

Those darn Catholics will fool you every time! You walk into the place thinking it's an Anglican church and pretty soon they've got you converted! Yikes! ;-)

I am not a regular church goer but I like churches. Go figure.

Interesting church, loved the glimpse of it. Hope it is preserved well.

Oh dam, I was hoping for a pub. Guess I wouldn't recognize a catholic church. But I do like the architecture. Better in B&W.

another excellent photo and great narrative. you always have great commentary and such fabulous photography. I always learn when I visit your site. Thanks for all of your comments on my site. I am glad you liked the man and the butte photo and the solar eclipse photos. What an experience. If you like travel photos, we just put together a travel photos site at www.vivalavoyage.com. Keep up the great photo blogging. You are inspiration.

Heavenly photo of a wonderful, historic church! How about a peak inside, too??

The church looked lovely and very unique. It must have a long history.

I love churches, most of thm are such lovely quiet places just to be...a bit like sitting under a tree.

Interesting story, people really found it important to build churches at one time in history..

Lovely substantial building you've share with us. Thank you.

For an old church, it's mighty simple (outside, at least). I think it's part of the charm now.

That church must be a good choice for weddings but the couples sure must pray that the wind is moderate and doesn´t take away some elaborate headsets and such.

Clever use of an old warehouse. Has a lot of character, it does -:)

Yes, a great location for a wedding and I love the extended name, but do agree that the building itself looks a bit austere. Great blue sky you turned on here, Babooshka.
Janice.

Did the catholics get chased off the mainland? Looks very pretty in colour. Can you send a bit of that blue sky over our way.

I went back to see what I guessed, and ... I didn't guess. But if I had "church" wouldn't have been a guess. That much is pretty obvious. And if I'd thought about it for a while, I might have guessed Catholic. Or Anglican. That would have been a guess though. In black and white or color. I bet this is a creepy sight on a foggy, moonlit night innit? or during a raging storm. The possibilities stagger the imagination.

Oh, in that same comment where I didn't guess, I mentioned the Surf City swing bridge... and by a strange quirk of the schedule, I have it featured today. Cosmic, yeah?

Since I didn't guess, I can't be wrong!HA I like the name Star of the Sea. A very sturdy church that can withstand anything the sea throws at her I think.
V

Excellent image, Babooshka!
When I see a church I always feel happy! :-)

The angle of your picture affords an excellent sight. That serene sky and the roof's colour combine well for a picture postcard effect.

Didn't know this was a Catholic church