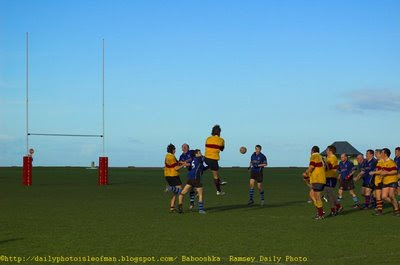 
As I inadvertently posted a r for a q last week I thought I'd play it safe with a reliable R, boys swinging into action. We have had lots of boys keep swinging recently haven't we on the blog? Just the way the cookie has crumbled. They are the blue shirts, black shorts, and stripey socks by the way. Ssh! Not allowed to name the other team, the away team. Let's just say people on Douglas may know them. I'm actually more of a Football( it's not soccer it's football) but I do think Rugby is a fabulous contact sport to photograph. I can also tell you at least one of those blue shirts went to see Star Trek. How do I know, ah well my sweeties I was with him and G. at that very Star Trek showing.

If you want to see my close up Rugby images and play guess the famous statue pose see links below.

Wonder if anyone else saw the this game?
Posted by Jane Hards Photography at Tuesday, May 19, 2009

So vivid, Babooshka! Very appropriate for such a visceral sport. My sister-in-law was actually on an all women's team once upon a time.

PS I would have been very happy to have taken any one of those linked images. A fabulous series.

I would just love to follow you around for a day! You are such a hoot! Love the shot! Enjoyed your other posts about Rugby, too! Always fun!

This is of course my favourite letter, and I'm very grateful that you have posted it twice! Though I know very little about Rugby, save that it is a Public School in England.

About time we had more Rugby from you. Anytime you want you can always come to Douglas and photograph a real team. Do you sell to the Indie or Courier?

Hope you get the T-shirt!

Douglas Steve- Thanks for the invite. Are you a Douglas player or spectator? Me work for the Courier or Indie newspaper no. International magazines buy the island paper not a chance. You know what the island is like. Thanks for the support.

Marley- I got plenty off him, but I really want that one.

Ex player.
Try Outlook or MT.
See you do TT
Where can we buy?

What fun! I hope you get your shirt!

Nice capture of the players in action.

Oh, I so miss my rugby !!! It's difficult to find on American TV.

I do manage to watch a few games at one of the local pubs, that is owned by an Irishman.

Watched the World Cup, but was in mourning for days after the All Blacks bombed out. The hubby says it's the first time he's seen me crying in my beer. It was a bad day for this ex-pat Kiwi :-(

You are right football isn't soccer and American football is not football as the foot is hardly used to kick the ball. So for me it's all Greek I don't know what to call it!LOL. Your photo however is full of life and shows great action! Many people have tried in vain to explain to me the difference between rugby, American Football and soccer.

I forgot to thank you for your kind comment! I appreciate your visit always, Thanks.

Amazing photo, everything was frozen in action, the lighting and color are extraordinary.

some day, I should learn the rules of rugby. It looks like a constant scrum.

Rrrrrrrr! My Grandmother had 12 children which meant that I had an uncountable number of cousins! (I was the only girl though) We played rugby every chance we got mainly so that we could be rougher and tumbly with each other than when playing football well... I've always called it foccer!

Looks like they're playing on the end of the world!

Alas, I know almost nothing about rugby. I wonder why Canadians haven't taken to it more than they have. Rigby looks more exciting than Canadian football...which is (believe it or not) tons better than the American version...but still not like rugby,

I need to find a rugby team over here. I would love to try to photograph that game. I always love your shots.

Congratulations! This picture is amazing!Great colour as well!
Léia

I'm not really fond of rugby, but I like the colour and the space in your photo !

Any chance of photographing the football team? Your TT photography is amazing but I can't seem to find a link to buy? Unframed small matt or gloss? I'll email you with ones I'm interested in? Do you do bulk orders? What charge p&p New Zealand for say 50 assorted.Thankx.

Just to add to the football confusion; here in Australia Aussie rules football is just called football, so the other sports have to use their real names - rugby and soccer. Hey and there's rugby league and rugby union, not that I know the difference.

what a cool shot. It has a surreal quality about it that is very appealing.

Love the colours of this photo. So vibrant. Doesn't seem real.

I am new, started with letter O,
to ABC Wednesday and loving it!
I have been all over the world today and I have learned about all sorts of "R" words. I must see a Rugby match....
Sherry

That photo is surreal - almost like they're playing on a stage with sky blue scenery. And one of them is levitating! Your TT photos are really good too, although to me motorcycle racing is a little mad.

Super shot for the letter R today, Baboosh! Great action amid the vivid blue and green.

Nice shot, and I'll bet you had fun at Star Trek with a rugby player. You deserve that Denis the Menace shirt, I'm sure.

Wow! What magnificent dynamic range you got in this! *applause, applause*