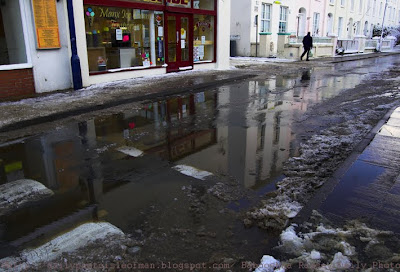 Anyone who knows me knows I have a thing about Henri Cartier Bresson. Well he was French( I am a Francophile too) and his photography is most definitely the single biggest inspiration of mine. Even before I knew the images I actually wanted to captured reflected his way of seeing the world. Considered the Godfather of modern street photography and photo journalism that is he captured the image as it was. No cropping, no desaturation, no tweaking in Photoshop. If it was blurry so be it. If someone wasn't quite in the best posed position does it really matter? In the real world, people are sitting around waiting for you to capture their image airbrushed, the sunset doesn't always looks beautiful and slush from that beautiful snowfall can make an equally interesting real image. Does every image have to be perfect, beautiful, geometrically balanced. The world is slightly askew, shoot it that way. You can always hold the camera at at different angle to capture the relatively dull scene to add your own creative twist. As he said he trapped life. Each image, especially the people I capture, traps that specific moment in time. The lone walker in the scene, unawares, whoever they were, braving what I can tell you now was a bitterly cold day midweek trapped through the lens. A moment never to be repeated. The pretty colours of Parliament Street reflected in the slush pools, the grim reality that when snow melts it's really quite miserable and horrible captured as it was. The way Bresson did.......

......Of course we all know that I am also barking mad. Throw in that element of quirkiness then all the above goes out the window and I can show you my very none Bresson images. Pics when I have specifically coaxed people to play the fool for the camera, or purposely shot the same inanimate object from quirky angles, waiting for sunlight to hit the bridge, because it seemed like a good idea at the time. 100 times, that being the abridged version of a very long story!

What a shame if we should have to shoot all of our photos the same. Better to experiment, sometimes gritty realism, sometimes beauty, sometime?

I like Bresson's work too. Don't think any of mine follow his 'Decisive Moment' rule, but I enjoy taking them anyway.

Thoughtful shot, thoughtful commentary on the creative process. How much do we impose our internal expectations on an image? What are we willing to do to the image to realize those expectations?

Hello,nice post thanks for sharing?. I just joined and I am going to catch up by reading for a while. I hope I can join in soon.

What's with all the anonymous comments. Apologies. I had to turn comments off for a while due to the spammers.

Funny how they show up now and then when you least expect them anonymous ones that is! Ah well, weird world! I love your shot and your thinking and Bresson's work as well. Great shot as always! Hope you have a great week!

I too am a HCB fan and that street scene is engrossing!

Great photo and an interesting commentary. I'm going to have to find out more about Bresson.

Many people were posting about Tenin last week. I'm still not sure I understand what all he is about. Surely there is more to it than laying your camera on the ground?

glad to see someone with the same view point about photography as i am :D

Babooshka: Nice of you to honor your mentor, really cool photo.

Bresson is one of my favourite photographers too, I love how he captured the moment and would love to be able to emulate him.

Your image illustrates Bresson's "Decisive Moment" well! A few seconds earlier and the walker is lost in the darkness of the shop windows. A little later and he is further along and not noticeable. This shot captures the mood of a cold winter's day. For me, that kind of inspiration came from Ansel Adams.

Great shot - love the reflections in the water! I agree - HCB is a great photographer!

I love this shot... you have captured the beauty of ice melt and slush!

Welcome back Mr. Isle of Man! Our streets have luckily even less snow and slush than yours! Spring has sprung here in EAGAN!
Cheers

Nice perspective. I can feel the cold slush; this photo gives me a sense of being there.