THE WHITE BRIDGE- MY WORLD 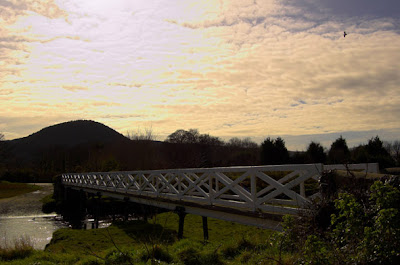 Over The White Bridge onto the Battle of Skyhill

Another Ramsey Landmark, and one of Babooshka's regular haunts is the aptly, if not imaginatively named White Bridge. The bridge is situated in The Poyll Dooey Nature Reserve and crosses over the Sulby river. The hill you can see on the left in the distance is Skyhill as in the battle which I have covered before in the viking posts and a My World post. It's basically a single file pedestrian only bridge, although bikes and motorbikes can be walked but not ridden across. It really is quite a narrow, sturdy but perfectly formed walkway. It's also another of many favourite places to photograph in Ramsey.

When looking for information about this bridge, again, I either came back to my own links or just found the vaguest reference, or uncorroborated info, which I need to confirm. Even images seemed limited. The Poyll Dooey Reserve is just the same. This is a specific area that has been set aside as a nature reserve/wetlands site for wildlife and yet it's almost as if it's some dirty little secret the island is ashamed of. To say I am exasperated by this is an understatement. I have a few ideas where to find text to post with my photos I regularly take of this place, so I will elaborate more soon. Nothing more fustrating than coming back to your own blog.

If you take the Bridge away and look up to Skyhill you will be looing upon the same view he Viking would have seen when they arrived marching towards Skyhill an onto battle. No skyscrappers to osbcure the beautiful veiw here.


MY WORLD and thank the skywatch gang once again for another inspired idea.
Posted by Jane Hards Photography at Tuesday, December 16, 2008

This is an absolutely beautiful picture - I don't know whether to share your frustration that the nature reserve isn't better known, or be relieved that not many people know about it (and hence can't spoil it).

I think I can see some Vikings approaching in the distance. Yep, for sure I do!

B, Viking sky too. You always deliver.

You live in a really idyllic looking place - love the narrow bridge.

Most enjoyable post, I think I would love to bring my camera to that bridge.

You amaze me every day. It's Harry Potter World you got.

What a lovely sky and I like White Bridge. Catchy name! :) Jill wants to hear your commentary on my subway couple in my photo on Peter's blog today. She is sure you have another delightful installment!
V

a beautiful image...I believe its wood and even though its wood, it truly looks magnificent...

Have a great week!

I always enjoy the symbolism of crossing over a bridge towards a bright horizon. It's an inspiring journey.

The bridge is beautiful, but the sky over it is splendid. I wouldn't mind to find such a sky for SWF. Thanks for your visit and kind comment.

A really fascinating bit of history and a great photo! Thanks for sharing!

I'd spend a lot of time there and be equally frustrated it wasn't getting the attention it deserves. You give a good sense of the place, however, and of course the name of the bridge is perfect.

Another cracking photo of the by now famous Whity. Maybe the reason that you can't find much information regarding Poyll Dooey is that until they returned the area to nature it was the Ramsey tip. All of the rubbish from Ramsey was dumped here for many a generation. Amazing that it's now turned into a fantastic haven of peace and soltitude.

Mannanan- Thanks for the education it does explain a lot. To me since moving here it's only ever been the reserve and grateful I am too.

I like that very much. Thanks for sharing your secret!

I always enjoy visiting your part of the world. You live in such a gorgeous area and there is so much history there. Thanks for sharing!

When I lived in Ramsey that place was a rubbish tip. It has been cleaned up. Came across your blog looking for Manx History. I am Manx, not lived there for 20 years. I will be bookmarking this. Never seen photographs of Ramsey that are as good as these.Well done and Thank You

Are they using that hawk for aerial recon?

Hope things are picking up in the work department for you and G. I'm keeping a good thought for ya!

That wonderful place must be one of the Mother Nature’s secret gardens and this lovely White Bridge is like a pearl necklace on this beautiful lady.

B. Why don't you get your act together and publish this in book form as a guide or something. It's well funny and pretty. Shame to waste them here.

That's interesting.
Actually, I admire
those items of interest
that have eluded
being categorized
and labeled on the
web. Fun post.

an ancient bridge that we no doubt cross in the spirit of those who crossed so long befoe . . . Aloha-

Unique bridge....interesting info! I like the looks of the nature reserve's name, Poyll Dooey!

I love the bridge and beautiful sky.

You will be our historian. Beautiful picture of a very interesting place.

I'm loving the shadow and light of the seemingly winter day. The lone bird, master of the skies, speaks to me too.

You have captured a most unusual sky over that historic bridge. Though the bridge doesn't look old at all, no Viking set foot upon it I don't think! A special place.

I love the clouds. beautiful scene!

I love the sky in this photo! Really adds to the feel of the shot in my opinion... yet another great picture!

i hope the skycrapers will not arrive anytime sooner:) sometimes, development can mess up nature's beauty so much. my world entry is here

Yes, Baboosh, I can see why that bridge is a favorite haunt and place for shooting in the reserve. Lovely post for skywatch too!

Very nice photography and I love your composition too

Babooshka, I love your bridge shots and this one leads into a glowing sky above Skyhill. What a great capture, and as always a marvelous interpretation.
Hope life is treating you better.

Another of your interesting posts with history, scenery and man made structure. Thanks.

Interesting how a small, understated bridge can be so grand. Must be the photographer & the text that makes it so.

I like this photo, and would like even more to have the "viking" view. I get such a kick out of taking in a view I know hasn't changed for thousands of years...yesterday my son and I visited Delphi here in Greece, and I transported myself back to being some ancient Greek seeking the Oracle. :<)

If I didn't know you I would say that you were fibbing and took this picture in Spring.
It is still so green and you got the sky at the right time...
Wonderful place to hang out by the way ;)
Maybe now that you are very famous, you could organize a Ramsay DP picnic on that bridge because it is just as nice as Eric's location.

wow! this is brilliant composition!

It seems as if you're going to have to be the expert on the Isle of Man..

I like small bridges. This surely is located in a beautiful spot.

Oh that looks like a lovely place to brush the cobwebs away. London can be very hard especially this time of the year with even more people in a highly stressed state. One of my favourite places is Foyles book store. I can loose myself in there for hours. I find wonderful books on London which help me with quirky facts for my blog. Thought you might be interested in some of their Isle of Man books: http://www.foyles.co.uk/results.asp?sf_01=kword_index&st_01=isle+of+man&sort=eh_nbd_rank%2Fd&CID=&x=21&y=5

Nice information about the white bridge. Love the scenery where the bridge leads to. Happy Tuesday.

Lovely shot and it looks like a graet place to visit. You will have to write your own history of your area.

So beautiful pic and bridge and interesting history!

I love bridges, this one is beautiful and I can imagine warrior Vikings crossing it :)
Good luck in finding out about its history.

Glad they got rid of the rubbish and reclaimed this area as a park. No need to trash it up again with buildings. I'd love to take a stroll across this bridge.

Like Manannin, I remember Poyll Dooey as a land fill site, there were also some allotments in there too, hence all the fruit trees and raspberry canes! If you know where to look. I remember swimming and rafting in the river under the bridge too. Watch out for Herons up there, a pair regularly nest just up stream.

It's always great when you can work Vikings into your post. Love it!

It's sometimes frustrating to look for info which you cannot find! On the other hand, it means that the place isn't so well known and that you perhaps have this place more for yourself - isn't that what you also want?

I believe you didn't give the reply to you yesterday's question? We all guessed, but only you have the answer!

What a beautiful area. I look forward to more photos.

The Good Life in Virginia said...

enjoyed reading your post about the bridge...thank you for sharing your part of the world with us. always enjoy reading your blog.

Very intersting and I love your composition with that sky and the angle.

I wished you would have taken some Wiking pictures with the bridge !

What a beautiful peaceful place to make your home. I enjoys your stories & pix alot. Thanks so much for your visit to my blog (& your generous compliment)

What a beautiful peaceful place to make your home. I enjoys your stories & pix alot. Thanks so much for your visit to my blog (& your generous compliment)